From the makers of ‘Chello Divas’ comes another blockbuster: Karsandas Pay & Use, Most waiting movie of Gujarati cinema 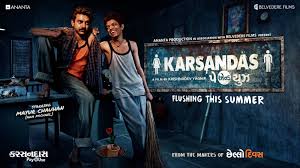 Karsandas Pay and Use is a romantic-comedy Gujarati film written and directed by Krishnadev Yagnik. The protagonist of the film is Tilok , who runs and administers a pay and use toilet with his younger brother Sundar. Tilok and Jaya happen to develop a love at first sight equation. Jaya is our film’s female protagonist. She is the eldest daughter of Chinubha and Amba among their six children. Chinubha is an auto-rickshaw driver. Slowly and gradually Tilok and Jaya’s romantic equation builds up and both of them discover without even saying, that how deep affection both of them have for each other.