GujjuBhai – Most Wanted (Gujarati: ગુજ્જુભાઈ – મોસ્ટ વોન્ટેડ) is a 2018 Indian Gujarati comedy film directed by Ishaan Randeria. This is the second film in Gujjubhai film series and sequel to Gujjubhai the Great (2015). It stars Siddharth Randeria and Jimit Trivedi in the lead roles. The film opened on 23 February 2018 to the mixed reviews. 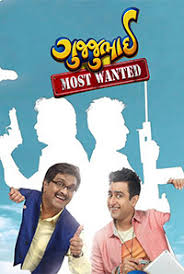