Origin of life: It is generally agreed that all life today evolved by common descent from a single primitive lifeform. We do not know how this early form came about, but scientists think it was a natural process which took place perhaps 3,900 million years ago. 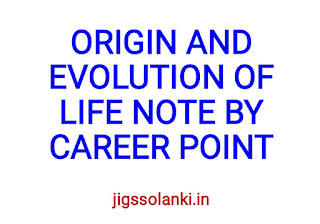 Origin of earth and its atmosphere:Earth is believed to have formed about 5 billion years ago. In the first 500 million years a dense atmosphere emerged from the vapor and gases that were expelled during degassing of the planet’s interior. These gases may have consisted of hydrogen (H2), water vapor, methane (CH4) , and carbon oxides. Prior to 3.5 billion years ago the atmosphere probably consisted of carbon dioxide (CO2), carbon monoxide (CO), water (H2O), nitrogen (N2), and hydrogen. The hydrosphere was formed 4 billion years ago from the condensation of water vapor, resulting in oceans of water in which sedimentation occurred. Evolution is a branch of science deals with the unfolding of new and complex species from simple species.